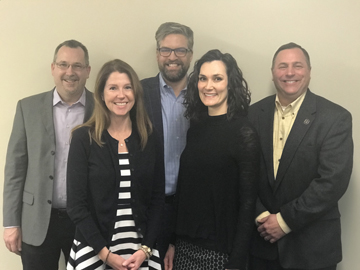 Board of Education President Todd Duwel reviews 2019 and presents the engagement opportunities the District has embarked on to make Oakwood Schools an exceptional district.

Todd T. Duwel began his term on the Board of Education in January 2012. Todd has lived in Oakwood for the majority of the past 30 years. He is a graduate of Oakwood High School (1990), Miami University, and the University of Dayton School of Law. Todd and his wife Lisa, have three daughters, all of whom attend Oakwood Schools.

Todd works for a national architectural, engineering and geospatial firm where he serves as the firm's Director of Risk Management and Compliance.

Todd has served The Oakwood Schools Foundation as an Advisory Council member, and previously served the Oakwood City Schools’ Business Advisory Council. He has also served on the Associate Board of the Boonshoft Museum of Discovery, and regularly volunteers his time to various other philanthropic and charitable interests, including the Brian Hafer Foundation, where he is a founding board member, and its current President.

Todd is the PTO and Legislative Liaison for the Board.

Cassie Darr began her term on the Board of Education in January of 2014. She is a graduate of Harman Elementary and a 2000 graduate of Oakwood High School. She earned her B.S. in Education with an Intervention Specialist license
from Miami University (2004), M.S. in Educational Leadership from the University of Dayton (2009) and her Principal’s licensure (2014). Cassie taught at Saville Elementary as an Intervention Specialist for grades K-4 from 2004-2013. During
her tenure at Saville, Cassie served on the building leadership team, was a new teacher mentor, participated on teacher interview and selection committees, contributed to curriculum mapping committees and helped revamp reading instruction for first and second grades to meet individual student needs. Currently, Cassie is the Director of Related Services at the Greene County Educational Service Center.

Cassie is the Arts Liaison for the Board.

Mike Miller is now in his third term, which expires December 2021, as a school board member. Mike attended both Smith and Harman and graduated from Oakwood in 1981. After graduation from Oakwood, he went on to Denison University graduating in 1985 with a double major in Political Science and History. In May 2017, Mike received his Master of Divinity from United Theological Seminary. Mike's wife, Linda, is a graduate of Oakwood (’77) and their two sons are also alumni of Oakwood. Mike helps to promote success in the district by encouraging both the public and private organizations to work together to build strong families and a healthy Oakwood community. He continues to honor his pledge of collaboratively working with interested parties to further the mission, vision, and values of the Oakwood City School District.

Mike is the Business Advisory Council and Finance Committee Liaison for the Board.

Meredith Quigley began her term in January 2016. Meredith is a graduate of Smith School and Oakwood High School
(1994). She graduated from Miami University in 1997 with a Bachelor of Arts degree in English. She and her family moved from Cincinnati to Oakwood in 2002. Meredith has two sons in the Oakwood School district and one who attends the University of Dayton.

Meredith is The Oakwood Schools Foundation and Alumni Association Liaison for the Board.

John Wilson and his family have lived in Oakwood for almost a decade. He and his wife, Michele, decided to move with their three children to Oakwood because of the district's strong academics, extra-curricular opportunities, the close community and the spirit of volunteerism among the residents.

John is a lifelong teacher. His first five years were spent teaching employment and independence skills to adults with Developmental Disabilities. He transitioned to a Social Studies role in 1998 and now works at the Career Technical High School in Greene County.

ROLE OF THE BOARD OF EDUCATION

The Oakwood City School District is governed by a five member School Board, elected at large and serving four-year terms.

All Board members maintain an email address to easily facilitate constituent communication. If you wish to contact a Board Member, please click on his/her name above.

As citizens who serve children and represent their community, individual school board members face complex and demanding challenges. Boards establish a vision for the education program, design a structure to achieve that vision, assure schools are accountable to the community and strongly advocate continuous improvement in student learning.

Board members pull together as a team toward a common goal - helping students achieve. Board members contribute hundreds of hours each year leading their district and are deeply involved in activities, spending many hours at the schools and extracurricular events. Whether crafting policies, hiring administrators, listening to staff and student concerns, or recognizing outstanding programs, board members always keep their eyes on doing what is best for our students.

Oakwood Schools uses BoardDocs, a cloud based management solution system, to manage all aspects of the preparation, approval and distribution of documents associated with board meetings.

To see meeting agendas, meeting minutes, board policies and additional information, go to BoardDocs. Click on the Meetings tab at the top, then click on the meeting date in the left column. You can then choose which meeting.

Board of Education meetings are held the second Monday of each month. Go to the Meeting Schedule for dates and times.

The policies of the Oakwood Schools are available at BoardDocs.

Pursuant to Oakwood Board of Education Policy 5517.01, bullying and other forms of aggressive behavior will be reported to the board. Semi-annual reports will be posted for review.